"Who knew Fairbanks was so fabulous! " Michelle 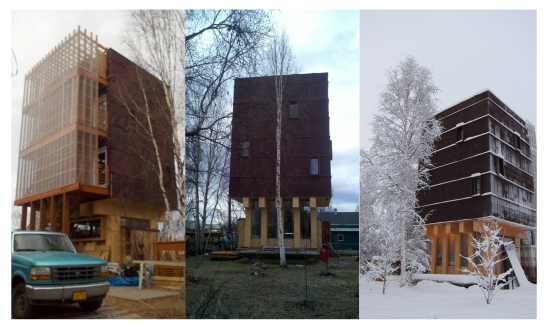 “Are you willing to include an unsuspecting word such as quince-tart, fillagree (sic), bulbous, or spasmodic…?”

That was the response I got when I asked Brian Marmor if I could interview him about his house for AK vs AK .

The answer is off-beat and imaginative which comes as no surprise given the house in question: a rectangular bastion of contemporary design rising up from a triangular plot of land and nestled amidst a dense web of mid-century cottage and ranch-style homes in Fairbanks’ Slaterville neighborhood.

A few months ago when Art Basel opened in Miami, Ferrari held a party in the oft ballyhooed 1111 Lincoln Road building, which the New York Times referred to as “architecturally striking” in its recap. It’s a good turn of phrase and one that has stuck with me because when I stumbled upon Brian’s house by accident one afternoon, that’s exactly how I felt about it.

“I call it the purple power tower,” said David Hayden, a local architect and project coordinator for TED Fellow Candy Chang’s “Looking For Love Again” installation, which hangs from the tops floors of the Polaris Building downtown.

Hayden says the trend towards minimalism in Fairbanks architecture is based “out of necessity for budget and desire for our need for something new… Industrial is basic and quick, what we need in our environment, short building season.”

Before connecting me with Marmor, Hayden first pointed me to Julie Decker who literally wrote the book on “New Alaskan Architecture.”

“One of my clients calls it northern arboreal industrial. I haven’t been able to improve upon it,” said Hayden. “I don’t know who invented it.  It is just part of the current lexicon of architecture.”

Hayden’s own contribution to this lexicon is mapped out nicely on the website for his company, L64 Design.

Now, onto the quince loving (and throwing) Brian Marmor:

AK: David calls your house purple. I thought it was brown. What color is it?

BM: Behr calls it ‘Bordeaux’, but when Behr was bought by Home Depot I called it ‘problematic’.  I only had 3/4 of the house painted and they changed the formula to make it cheaper.  Did not look the same. Required much effort on my part to get ahold of the original formula.  There will never again be a house of a shade quite like mine.  If you take that sentence out of context, making it sound arrogant, I will throw a quince at you.  I was lucky in the color choice. Sometimes you see magicians in goofy black and purple attire or stage sets, or in the early evening the eyes play tricks on you and you think you see an animal in the woods… and I think these dark red-blue ranges can have a dynamic character.  The color can appear on what appears one thing in one light, appears another thing in another light.  It makes me happy that the house can express itself… is not doomed to the plague of beige that this town is stricken with.

AK: Does your house have a name?

AK:  Why did you choose to build that house in that neighborhood? (Do you consider that ‘hood to be Slaterville?)

BM: Friends in the neighborhood have dubbed it NoMi, they live in SoMi… with the division being Minnie Street.  But yes, in the 1950’s the Charles Slater subdivision was officially platted. The choice of where to build was not so much an architectural theory question, as a practical question.  I suppose the choice of living in town versus out of town was a philosophical stance…

People and Places to Know